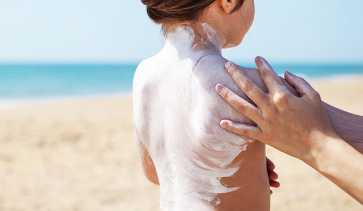 I have been saying this for years. Hopefully now that the FDA is FINALLY confirming that the chemicals from Sunscreen gets into your blood, more people will switch to non-toxic sunscreen.

What is sad, is that the FDA is NOT “confirming” that these unsafe levels of chemicals in the blood actually increase your risk for disease.

YOU HAVE GOT TO BE KIDDING ME!!!

I guess that after all these years of promoting sunscreen it is hard to admit that the sunscreen has been more damaging than helpful.

Do you want to wait another few years to get confirmation from the FDA (after more research) or do you want to be safe now?

It is important to let the sun on your skin because that will increase your vitamin D which will improve your immune system. However, you do not want to burn. So, when necessary, cover up or use a natural safe effective sunscreen. I have tested Badger (which is what I have in my online store) and it is fabulous! It works and it will not make you sick.

Here is the full article…

Sunscreens contains more chemicals at higher concentrations than they did 50 years ago.

These two facts have prompted the FDA to re-evaluate the safety of sunscreen.

First the agency conducted a study to determine whether the chemicals used as active ingredients in the products are absorbed into the bloodstream, which the industry has denied.

“Because sunscreens are formulated to work on the surface of the skin, some have argued that sunscreens would not be absorbed in appreciable quantities and therefore that studies are unnecessary,” the agency said in a press release.

The study, published May 5 in the Journal of the American Medical Association, found the opposite to be true.

The chemicals are absorbed into the bloodstream at concerning levels.

The 24 participants in the study were instructed to apply sunscreen four times per day for four days on all areas that wouldn’t be covered by a swimsuit, an amount one might realistically apply on a beach vacation.

Researchers then measured the concentration of four different active ingredients in their blood: avobenzone, oxybenzone, octocrylene and ecamsule.

After just one day, all four chemicals were found in levels that far exceed the level at which the FDA requires safety testing (anything higher than .5 nanograms per milliliter).

For oxybenzone, which has been found along with other sunscreen ingredients in breast milk, blood concentrations reached the threshold after a single application and exceeded 20 nanograms per milliliter on day 7 of the study.

Oxybenzone is also toxic to coral reefs, which has led Hawaii to ban sunscreens that contain it.

Three of the chemicals remained in the bloodstream seven days later.

Now the FDA must conduct further studies on all four ingredients before they can be considered generally safe and effective.

Specifically, the agency needs to determine whether the chemicals the risk for cancer, birth defects, or other adverse effects.

“With sunscreens now being used with greater frequency, in larger amounts, it is more important than ever to ensure that sunscreens are safe and effective for daily, life-long use,” the press release says.

“Creation of sunscreen products with SPFs greater than 15 and greater broad-spectrum protection against UVA and UVB rays have led to currently marketed products with more active ingredients combined together in higher concentrations than were previously used.”

The FDA recommends continuing to use sunscreen while the chemicals are being studied, claiming the risks of sunburn outweigh the risks of sunscreen, but considering they haven’t weighed those risks yet, it may be wise to take their advice with a grain of salt.

Brenda’s Note: I have always considered regular sunscreen to be unsafe and have been carrying natural, safe and effective sunscreens in my online store.

Write your gift choice in the “order notes” section on the check out page (next to your name).

Are you looking for a specific product?

Use the search form below:

Are you looking for a resource for a particular health issue?

Use the search form below: